Has FEAR been holding you back from living the life you know deep in your heart & soul that you were born to create?

We all got a major wakeup call from the recent tragic death of Kobe Bryant, his daughter Gianna and the seven other amazing beings we lost on January 26, 2020, that life is far too short and we are not promised tomorrow.

That’s why today I’m here to talk about:

Why It’s Time to Step Into Your God-Given Greatness! 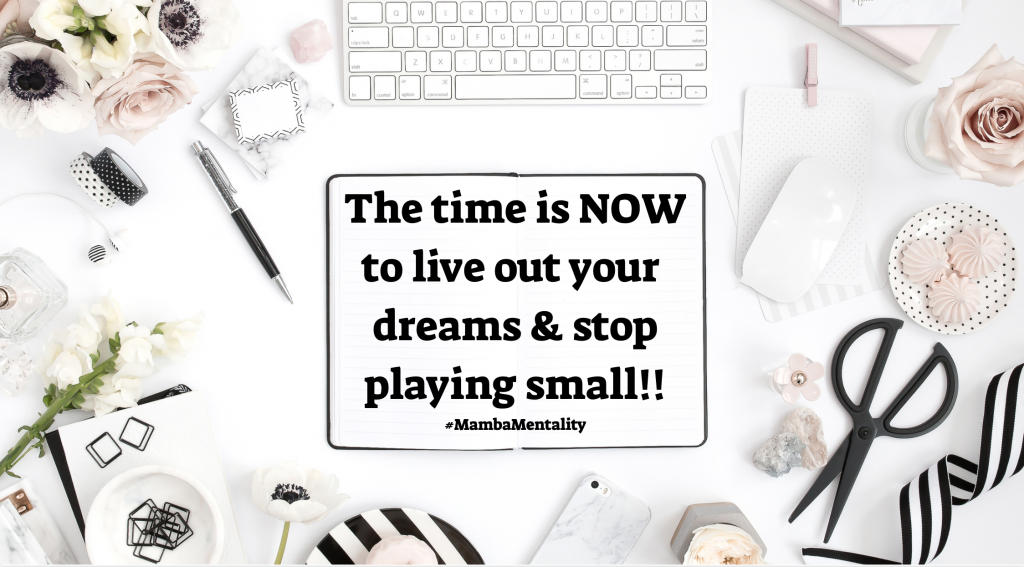 I’ve been relistening to a couple of podcasts that Kobe Bryant was on and one thing that has struck me is that the time is now to start living out your dreams and stop playing so dang small! We only have right now and there are no guarantees.

How dare we think that we are promised tomorrow, let alone the next hour? It’s a gift to pause, reflect, and really ask ourselves am I utilizing this gift that is life? Are we truly living up to the expectations that our creator has made for us?

Gone are the days when you’re born, you have the same job, and you retire thirty-five years later. That just doesn’t happen anymore! What I have truly loved most about the stories that I’m hearing about Kobe Bryant, in particular, is what he has done since he retired from the NBA – I like to call them “reinvention tours.”

Not only was he an amazing husband and father to his four girls, but he was doing so much to leverage women in sports. He was creating a studio. He had a podcast for children. He wrote a book. He won an oscar!!!! How remarkable is that?

How many different things have you done in your life? My personal reinvention tours have looked like:

Isn’t it remarkable that you have the capability with the phone that’s right at your fingertips to impact the world, yet we assume that we have tomorrow, next week or next year to do it? We have the power to share our message with the world through social media and the time is NOW!

How to Stop Hiding, Playing Small and Getting in Your Own Way! 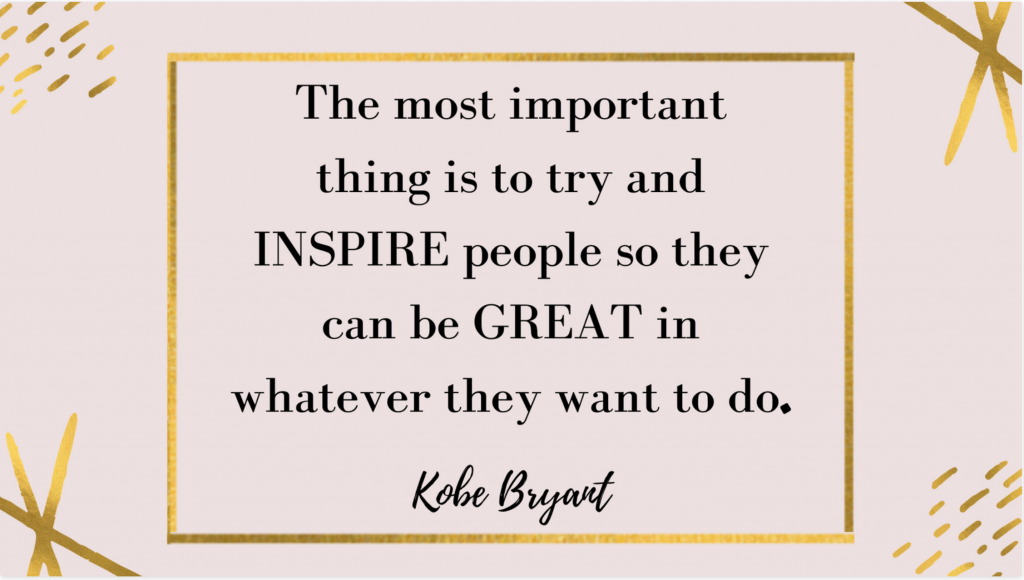 One of the things Kobe shared that I love is that “The most important thing is to try and inspire people so that they can be great in whatever they want to do.”

We are all storytellers in different ways. How beautiful is it that it is more accessible now then it has ever been before to put your story out there? You don’t have to be an NBA basketball player or a celebrity to do any of those things. Because we have social media you have the ability to inspire, motivate and create a long-lasting legacy.

You might not see the opportunity right now, that’s in front of you, but it’s a giant gift and we’re not all using that. We’re playing way too small!

How to Embrace The #MambaMentality! 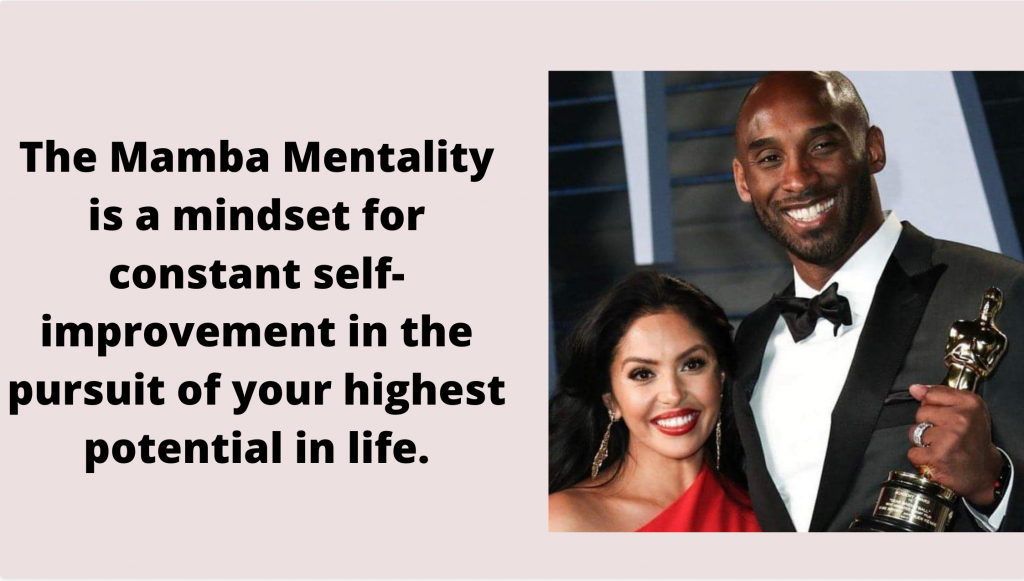 Kobe was known as “The Black Mamba” because he had laser focus and work-ethic like nobody else. The Mamba Mentality is a mindset for constant self-improvement in the pursuit of your highest potential in life.

Regardless of who you are or how you grew up, you are not a product or a victim of your circumstances. You have a choice.

Maybe your mind has a hard time wrapping around your pure potential. This is why I do what I do because all I see is untapped potential! I also know that there are those things that have been holding you back because it’s the same thing that’s been holding me back.

And, I’ve talked a lot about this in my weekly blog posts. Last week I had my amazing friend, Mel Abraham join us to share his cancer journey, how he got diagnosed with cancer last June, and how he armed himself with information so he could fight cancer – which he has!

How to Take Full Personal Responsibility for Your Life!

This book is why I was able to step into my greatness. I did the ultimate pivot when I went from having a successful offline business as a makeup artist, wardrobe stylist and set designer working behind the scenes to stepping in front of the camera and building a successful 7-figure online business.

While I had started a blog a few years before I ever did my first live video, I had a lot of thoughts and opinions, but only some of my clients who happened to be some of the top names in the business and online marketing space, ever heard them. They kept pushing me and encouraging me to share my greatness. Even with that type of coaching, pushing, and mentoring, it was ultimately my choice to finally show up and say I’m going to do it scared!!!

The next big thing that I’m pushing myself to do this year will be my first live event.

And, I know exactly how I envision it, who I want to be there, and, why I want them to be there. I can envision the outcome and the results of what we’re going to create together. I’ve been stalling for way too long. I’ve brought my favorite people to other people’s live events. It’s beyond my time! There is no ready and I’m just going to do it with the fear!

How to Grow Your Confidence “Muscles” and Declare Your Intentions Right Now! 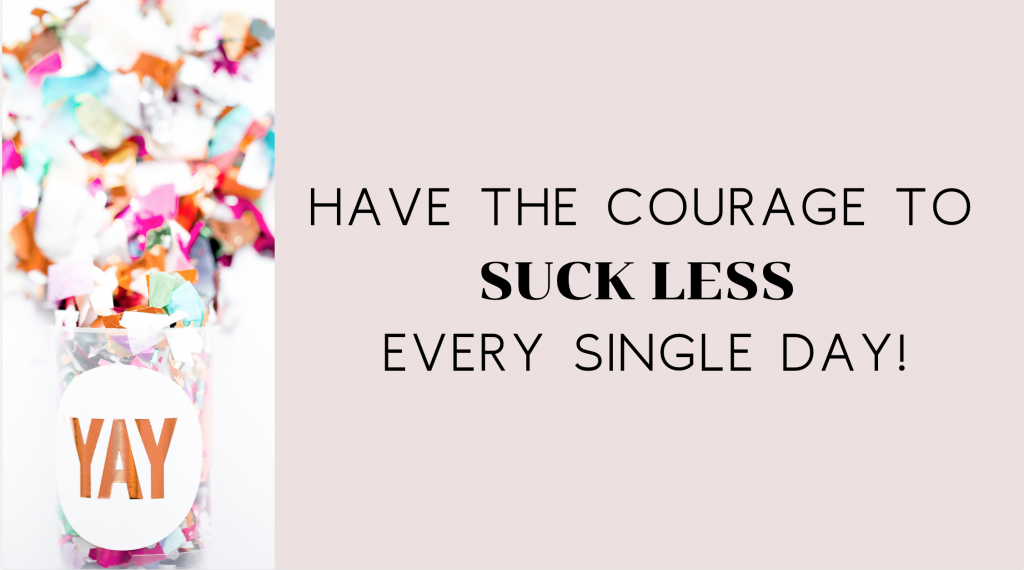 Imagine where you’re going to be if you follow my mantra, “Have the courage to suck less every single day!”  I know that’s not eloquent or poetic, but it’s so true!

What if you woke up every single and day and you’re like, I’m going to be one percent less sucky than I was yesterday? Or, maybe you could flip that around and be one percent better?

However, you want to look at it, give yourself permission to have the courage to suck less a little bit day after day. Because it’s not just time to grow our confidence muscles, but it’s time to declare your intentions!

So, what is the one thing that you’re going to commit to taking action on in the next 24 hours?

I am more inspired and motivated than ever to be a guide for other people to realize their dreams! I’m not asking you to make it happen overnight, but I’m asking you to see the possibility and the brilliance of taking one little baby step every single day. And really picture what the end goal is and then work backward by taking consistent baby steps to get there.

It is time to wake up. It is time to realize how amazing you are and it is your choice whether you shrink or you show up. Will you show up by taking that messy, ugly action every single day?!?!

Get on the VIP Waitlist for Lights Camera Branding!

Have you realized that you’ve been dabbling and struggling to figure out this whole business and personal branding thing? Do you have a personal brand and products and services that you want to elevate? Are you tired of launching to crickets?

If you’re not yet a part of my amazing community, get on my VIP waitlist for Lights Camera Branding because you are going to get extra perks for jumping on extra early. Go to lightscamerabranding.com to get your spot on the waitlist.